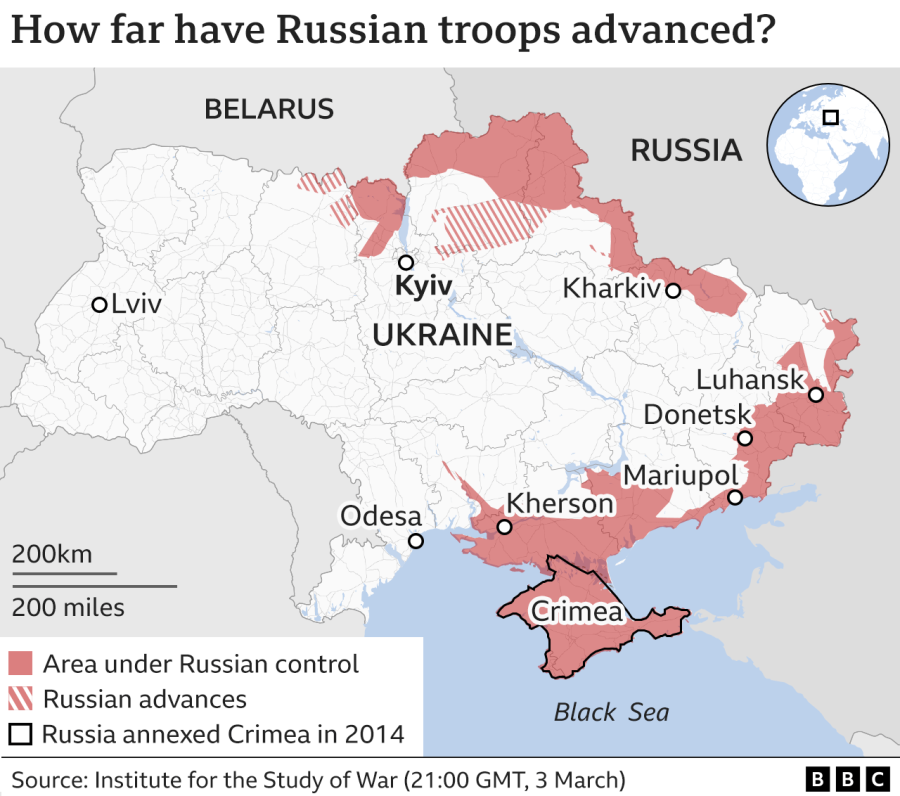 While we were enjoying our snow break, the Russian Federation commenced its anticipated invasion of Ukraine and ended Europe’s relative peace which has been enjoyed since the closing of World War II.  At the start, the outlook for Ukraine was grim.  Most media outlets predicted that the Russian invasion would steamroll the nation and that Kyiv would fall in a couple of days.  Thankfully, this sentiment has proven to be everything but true.  Though many of the nation’s cities have been laid to waste, only a small chunk of territory has been occupied by Russian forces due to logistic issues.  All the while, the fighting will of the Ukrainian people has been unparalleled.  Citizens have come together to combat the invasion by means of picking up arms and defending the nation as servicemen would to breweries producing Molotov cocktails to arm citizens with the ability to resist superior Russian armor.  This fighting spirit has been embodied by the nation’s President, Volodymyr Zelensky, who has refused extraction proposals from the United States stating, “The fight is here, I need ammunition, not a ride.”  Friendly nations have not been sitting back without influencing the fight either.  Numerous NATO and other UN nations have allocated resources to the Ukrainian war effort and have placed severe sanctions on the dictator, yeah I said dictator, Vladimir Putin, his oligarchs, and the Russian Federation as a whole.  Also, the United States and NATO allies have moved troops into numerous Eastern European member states.  While the threat of World War III is unlikely, it still rests on the table.  Numerous Russian rocket artillery barrages and other ordnance have found themselves landing meer miles from the Polish, Romanian and Slovakian borders.  A strike gone awry landing in these nations very well could lead to the escalation of this Ukrainian conflict to a West vs. East conflict of proportions never before seen.  Though the question of the war expanding is highly questionable, it is a given fact that the will of the Ukrainian people to uphold their sovereignty from past oppressors is unbreakable.  Amazing stories have been circulating from the Ghost of Kyiv becoming Europe’s first fighter ace in nearly 80 years to Vitaly Volodymyrovich sacrificing himself to destroy Russian tanks and prevent a further advance.  Affirmatively, Russia has created legends and martyrs of Ukrainian people, and a world order ready to bring it down