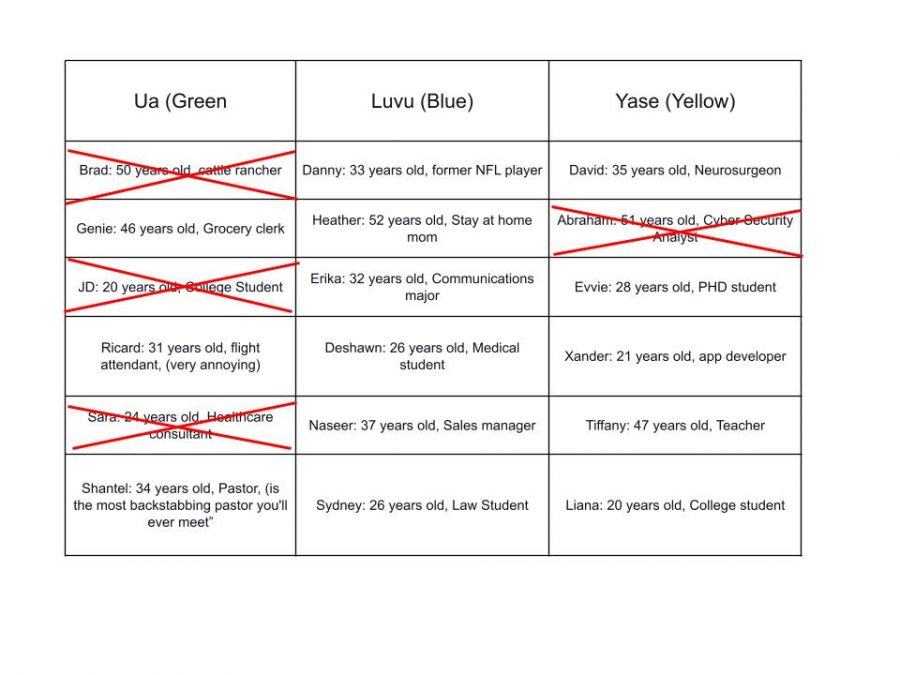 After the green tribe had lost the immunity challenge in episode 3 they were being sent to tribal council to either vote out JD or Brad. JD was a reason for losing the challenge, however an ally to the rest of the tribe. Brad was more of a solo guy in the tribe and had a lot of power that he could hold, however. In the end, my favorite survivor, Brad was voted off. Green tribe moves down to 4 people and the game continues.

Episode 4: They Hate me ‘Cause They Ain’t Me

The green tribe returns back to their camp and they are all frustrated at each other. One green tribe member, Genie, felt that she was left out of the voting conversation to vote out Brad, and was under the impression that they were voting someone else off. She holds this grudge against the other 3 members of the tribe and it creates a small rift in the group.

Next up however is the first reward challenge of the season. For these challenges the first 2 teams get prizes and the losing team gets nothing. The first place prize is to have a survival expert come to your camp and teach you a whole load of survival skills on how to hunt, gather, and survive easier on the island. The second place prize is one single rainbow fish for your tribe to enjoy. The green tribe got first place in the challenge and learned a whole new load of survival techniques from a native Fijian and the yellow tribe was given the rainbow fish and enjoyed that to the best of their ability.

The blue tribe lost a challenge for the first time in the entire season, and now that they lost something there is some discourse between the group. A tribe member, Erika, starts talking behind other members’ backs and trying to get a mob mentality against another girl, Sydney. She tells Deshawn this, but Deshawn is an ally with the rest of the tribe. Deshawn tells just about everyone else and then 2 blue tribe members devise a plan to throw the immunity challenge so they can vote out Erika.

After the break of the reward challenge, it was time for the immunity challenge of the episode. This one, like the rest, was essentially an obstacle course. All three tribes get off to a good start, and it is seemingly obvious that the blue tribe is trying to lose. Not all of the blue members are so keen on losing. Blue tribe member and certified superhero Naseer decided to step it up and started picking up the pace for the other 2 that were trying to lose. The yellow tribe came in first place at a good lead. Then it was a close race between green and blue tribes. Naseer for the blue tribe basically saved the challenge for them, and they came in second. The green tribe lost again and is being sent back to tribal council to vote out another member.

The two main tribe members that are at risk are JD and Genie. Both are just kind of the outcasts from the other 2 members and they aren’t the favorites.