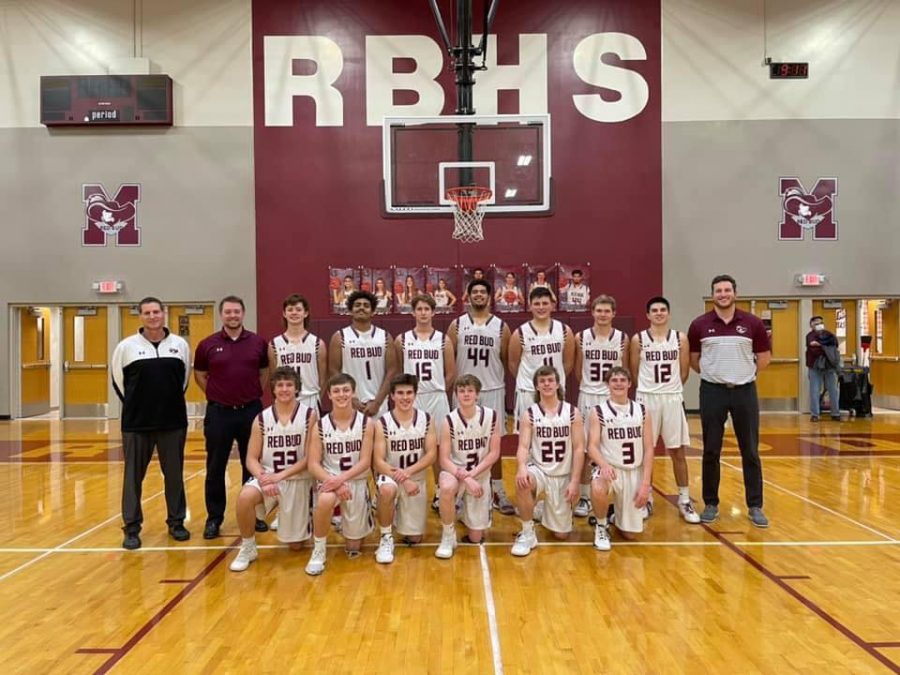 The Red Bud Varsity Musketeers played their final home game against the New Athens Yellow Jackets on Thursday evening. Red Bud was looking to defeat New Athens for the second time this year, as the Musketeers were victorious on the road against the Yellow Jackets earlier in the season. Red Bud began the game by heavily utilizing their post-game, with their first 13 points all coming from inside the paint. The Yellow Jackets answered well with an open paint score from Center Ryan Juenger and a wide-open three from Cody Boone. Games lead scorer Logan Cathell (12 points) sank a wide-open 3 at the buzzer to give Red Bud a 19-13 lead after the first quarter. Both sides struggled on the offensive end of the floor in the second quarter, scoring only 17 points in total. Parker Van Dorn made Red Bud’s offensive drives count however as he scored two buckets in the paint after grabbing offensive rebounds. New Athens ended the quarter with a fast-break layup by Juenger after a turnover by the Red Bud offense, however, it was still Red Bud in command, holding a slim 28-23 lead. The Musketeers came out of halftime strong, with Devin Hall gaining momentum on the floor by elevating for a monster block and drawing a charge on back-to-back possessions. Max Diewald capitalized off of the turnover with a strong one-handed layup to put Red Bud ahead by 8. James Range and Luis Mazariego both combined with the rest of New Athens offense to beat the Red Bud defense and cut the lead back down to 3. Ending the quarter again was Logan Cathell with another 3 coming off a Red Bud timeout to make it a 37-32 Musketeer lead heading into the fourth. New Athens senior Mason Paige touched a layup off the front of the rim for the Jackets early on in the fourth to cut the lead to a mere 3 points, but that is as close as New Athens would get. Easton Lucht got hot at the perfect time, as he took charge in the fourth to ensure Red Bud the victory. Lucht flew through the air to swat a Yellow Jacket jumper out of bounds for a monster block. On the next possession, he grabbed an offensive rebound off of the missed Red Bud jumper and went up strong to score the 2 point bucket. An assist to Max Diewald and a fast-break layup by Lucht put the game on ice as Red Bud went on to win by a final score of 52-43.