Conference Match-up vs. Marissa Did Not Go as Hoped 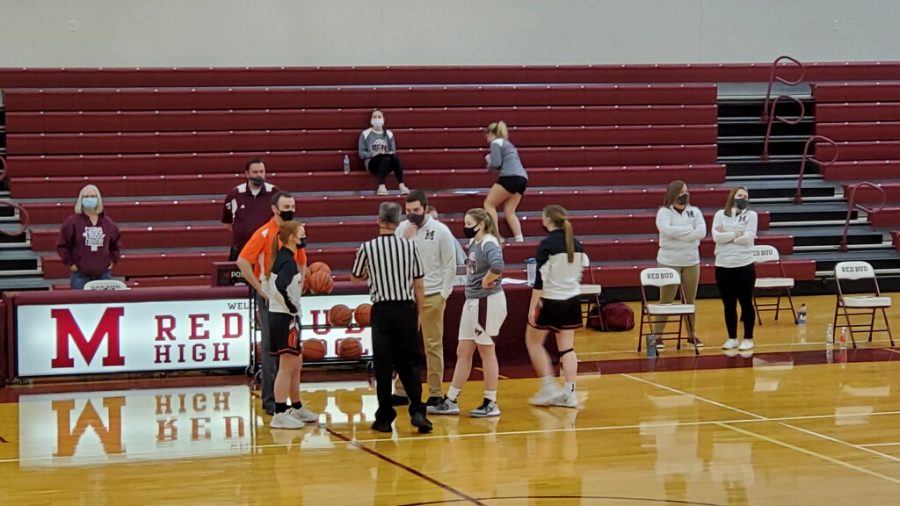 On Saturday, March 6, the Marissa Meteors traveled to Red Bud for a major Conference match-up.  The Musketeers came out of the gate strong, but the energy soon dwindled and the Musketeers found themselves in trouble by the second half.

Throughout the first quarter, the ladies put up a solid fourteen points; however, Marissa managed to score fifteen points. Kassidy Ellner had two of the points from a field goal. Hannah Sievers had five from a two-pointer and a three-pointer. Meridith Whelan picked up the rest of the points with two, two-point baskets and sinking a three. The battle continued through the second quarter.

This quarter, Red Bud added eight points to the board. Olivia Carle had four of those from two-point field goals. Sievers and Whelan each had two, but Whelan’s were from going two for three from the line while Sievers just hit a two-point field goal. Unfortunately, Red Bud had some foul trouble and Marissa put up eleven, so the Lady Musketeers were down by four at halftime.

Red Bud basketball took a turn for the worse in the third quarter. They could only put up five points made from Addison Dilley shooting a three-pointer and Madison Pensoneau hitting a two-point field goal. As their defense fell apart, the Musketeers allowed the Meteors to score twenty-two points. This was a tough blow to the scoreboard as Red Bud walked into the fourth trailing by twenty-one points.

The fourth quarter became a competition again as Red Bud only put up six, but only allowed nine. Carle had four points from two-point baskets. Whelan had the other two as she went two for two from the line again. Unfortunately, Red Bud dug themselves too big a hole in the third quarter and could not get out. Marissa won the game 33-57.