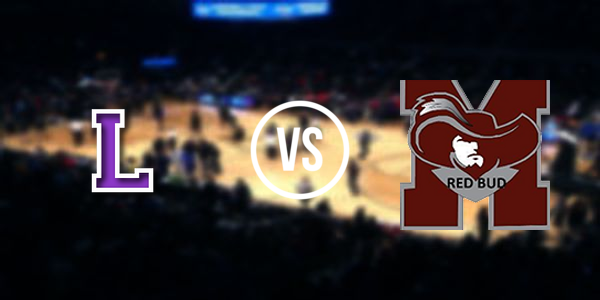 The Red Bud Musketeers took on the Lebanon Greyhounds Thursday evening in search of defeating them for the second time this season. Red Bud’s offense was hot from the start, with Junior Nick Fehr sinking an easy 3 for the game’s opening points. Red Bud went on an 11-1 run to start the game, with Lebanon’s only point coming off of a free throw. It was a steal parade on the Greyhounds, with fast-break layups resulting from steals by Devin Hall, Nick Fehr, Austin Grohmann, Easton Lucht, and Logan Cathel all in the first quarter. Lebanon’s first field goal came with just 3 minutes remaining in the first quarter. The Greyhounds added to their single-digit score with a buzzer-beater half-court lob by Isiah Cunningham to make it a 23-8 Red Bud lead going into the second quarter. The offensive effort for Red Bud continued to dominate throughout the second quarter especially thanks to Senior Wyatt Cowell. Cowell dropped an impressive 8 points in the 2nd quarter with two deep corner 2 point field goals, 2 free throws, and a step back 2 after bouncing the Lebanon defender. Mason Ferrell also played a key role in keeping Red Bud’s lead by grabbing his own offensive rebound and scoring a quick 2, as well as backing down the Greyhound postman and sinking a smooth hook shot. Lebanon would need a miracle after the half to overcome Red Bud’s 43-17 point lead. Although Lebanon’s offense picked up in the second half, Red Bud remained consistent. Grohmann scored his second bucket of the night with a strong drive into the paint, followed by another offensive rebound and score by the towering Ferrell. Lebanon sharpshooter Cunningham had a pair of 3s to try and get Lebanon back in the game but to no avail. Devin Hall kept the Musketeer momentum flowing through the third as he drew a charge on the defensive end, which led to another uncontested 3 from the night’s lead scorer Nick Fehr. Austin Grohmann never quit on the defensive end all night long, as he had a strong two-handed block and drew a charge in the final 4 minutes of the game. Fehr finished the Greyhounds off with a long 2, as the Musketeers went on to win by a final score of 62-42. I spoke to team captain, Austin Grohmann after the game concerning how the Musketeer’s shaky second-half defense would fare tomorrow evening against a much better Gibault Hawks team. I also asked what answer Red Bud would have for Gibault’s lead scorer Ryan Bollinger, who is averaging 13 points per game for the Hawks. Grohmann noted that Red Bud came out strong to begin the game, but he said they need to make sure they come out and play their best ball in both halves. He added that this team knows how to get after it and hustle in close games and that the team feels confident going into tomorrow’s matchup considering how close the two teams have played each other in the past. As for Bollinger, Grohmann stated that Red Bud’s top two defenders are going to be “…going at him the whole night and never relenting.” Friday night’s Varsity matchup between Red Bud and Gibault will follow the JV contest beginning at 6.