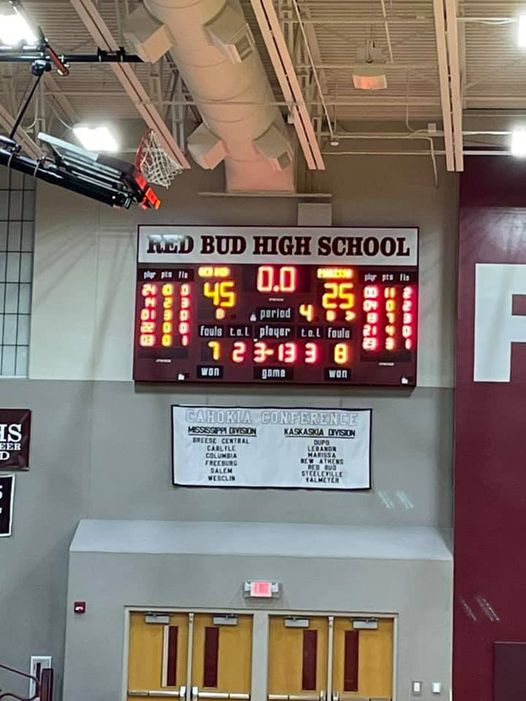 After the Musketeers matchup on Tuesday against Columbia was canceled due to inclement weather, the Marissa Meteors traveled to Red Bud to take on the 2-1 Musketeers. Red Bud started off slow on the offensive end, shooting 0/4 from the field on their first 4 attempts. Marissa’s Hunter Baker scored the first 2 for Marissa with a spot-up jumper from the wing. Max Diewald ended Red Bud’s shooting troubles by draining back-to-back 3’s to take a 6-4 lead early on. Nick Fehr followed the Diewald 3’s with a turnaround jumper off the inbound to put Red Bud up by 4. The Musketeer offense clicked in the remaining minutes of the 1st, as Wyatt Cowell found Fehr for an open 3. Parker VanDorn closed out the quarter with a two-point jumper from the top of the key and a falling floater to put the Musketeers up by 10. VanDorn was effective on both sides of the ball as he blocked Marissa’s final shot of the quarter to keep Red Bud up 17-7 to end the first. Although it was Baker once again scoring for Marissa to start the second quarter, all the praise belongs to Mason “Sensational” Ferrell. Scoring 6 second-quarter points, the Musketeer forward was putting on a clinic in the paint. Being swarmed by 2 Meteor defenders, Ferrell scored a quick two. In the next two Red Bud drives, Ferrell touched a layup off the glass for another field goal and scored a crafty hook shot to score the second-chance points off a Musketeer offensive rebound. Marissa’s Garrett Harrell went 0/2 from the free-throw line to end the half, giving Red Bud a 27-13 advantage headed into the locker room. After a long 2 point jumper by Fehr to open the third quarter of play, Baker drew an and 1 for the Meteors. Red Bud grabbed the rebound of Baker’s missed free throw, as Nick Fehr converted again from beyond the three-point arc. Coach CJ Cruser called a timeout to regroup his squad shortly after the start of the third quarter after 3 consecutive turnovers by the Red Bud offense. After the timeout, Red Bud’s was jump-started, creating opportunities on the defensive side of the floor with a blocked 3 by Ferrell, and a steal by VanDorn. Wyatt Cowell headed to the line for Red Bud resulting due to the turnover, in which he missed both free throws. He redeemed himself on the next drive by splashing a long corner 2. Red Bud held a commanding twenty-point lead (38-18) at the end of the third quarter. The Meteors were down for the count in the fourth scoring only seven points, as Red Bud went on to win 45-25. After the game, I interviewed swingman, Max Diewald, regarding his two three-point buckets to get the Red Bud offense kicking. After I noted that he was struggling with his three-ball to start the season, I asked him how tonight changed, and how he plans to translate tonight’s success to the remainder of the season. He stated that he just had to keep trusting his shot. He also added that his misses in previous games were all connecting with the rim, but they were falling for him tonight. He closed by saying, “The first couple of games of the season are always tough and a time for a team to find each other. As the season moves forward we all feel more comfortable and find our groove. It took me a couple of games to get settled in and find my confidence personally, as well as our team as a whole.” The Musketeers look to make it a three-win streak on Saturday afternoon on the road against the Steeleville Warriors.