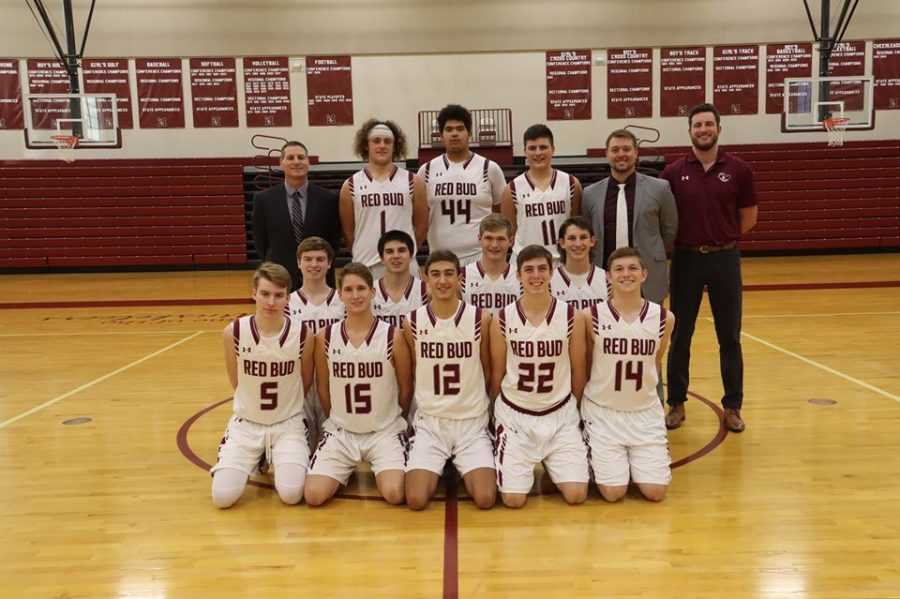 The Musketeers opened up their season Monday night in the Duquoin tournament. This is the first year in a long time the team is not in the Trico tournament. The team is hoping for major improvements from last year, as they finished with an abysmal record. They hope the hard work in the gym and weight room throughout the summer will finally pay off. The team returns their top three leading scorers in Cater Wiegard, Jayden Birkner, and Alex Kueker. As Seniors, along with Colby Koester and Noah Malott, they hope to flip the script this season and help lead the team to more victories. The Juniors will also play a large roll for the team this season. Guys like Bryce Amann, Wyatt Cowell, Max Simpson, Austin Grohmann, Mason Ferrell, and Parker Van Dorn will all contribute to the team and provide meaningful minutes. Lone Varsity Sophomore Max Diewald will also play a huge roll on the Varsity roster as well. With this experienced roster and Coach Cruser leading the way, the team hopes to have a very successful season.

The first game of the round robin style tournament was against the Massac County Patriots. The Musketeers took a quick 5-0 start after a Birkner dump off to Amann for two and a Wiegard three ball. The Patriots began a run of their own and took a 18-10 lead at the end of the first quarter.

Massac County began to blow the game open as they went on a 21-0 run in the second quarter after Wiegard hit another three to start the quarter. The Musketeers were struggling to hit their shots and take care of the ball. The score was 39-13 heading into the break.

The Musketeers came out strong in the third and began hitting more shots. Wiegard added 7 in the quarter and Max Simpson knocked down two mid-range jump shots. Although the offense picked up, the defense did not pick up for the rest of the game. The Patriots took the victory 65-38.

The second game of the season the Musketeers faced the host school Duquoin Indians. The Musketeers again came out strong with a lot of intensity. Amann put in the first basket for the team and Wiegard added 6 in the quarter. The score was 10-10 after the first.

The game remained even throughout the second quarter as both teams exchanged baskets. Max Diewald put in four points for the Musketeers and Parker Van Dorn put in a layup. The score was knotted up at 24 going into half.

The Musketeers offense contained their success, but the defense fell off. They struggled guarding the Indian’s big man as he converted on many easy baskets. The Indians stretched the lead to 10 and the Musketeers could not make a comeback. The Musketeers fell to 0-2 as they lost 61-46. Wiegard finished with 21 points and Diewald finished with 11.

For the third game of the year, the Musketeers took on the Carmi White Bulldogs. The Musketeers had a very solid first quarter offensively, with Wiegard and Kueker combining for all of the teams 15 points. However, they struggled defensively with the big men of the bulldogs and gave up 18 in the quarter.

Both teams struggled offensively in the second quarter, as they both scored 4 points. Simpson and Wiegard each had 2 in the quarter and the score was 22-19 going into half.

Both teams remained close throughout the third quarter. Kueker hit a three and Colby Koester put in a layup. The Musketeers still trailed by four going into the fourth.

Wiegard put in 2 three pointers in the final quarter and Kueker added another. Unfortunately, it would not be enough as the Musketeers dropped their third game of the season 45-37. The Musketeers could not get the necessary stops when need to take over the game. Wiegard had another big game with 20 points. Kueker finished with 11.

The final game of the tournament was against the Cairo Pilots. They had beaten Duquoin and Carmi White, so the team was not sure if this game would go their way, but they were still going to give it their all.

The Musketeers came out pretty slow for the first few minutes, falling behind 7-0 before Kueker scored the first basket for the team. The Musketeers turned it on to finish out the quarter. Kueker continued finding open spaces in the Pilot’s zone defense and his teammates found him for easy mid-range shots. He finished with 12 in the quarter.

The Musketeers continued having success on the offensive end. Birkner put in a floater from mid range and Wiegard hit a jump shot from the elbow. Koester stole the ball from a Cairo guard and finished with a layup on the other end for a huge momentum play. With time winding down in the quarter, Kueker hit a contested three pointer to put the team up 34-22 going into half.

The Musketeers played even with Cairo in the third quarter. Wiegard added two three balls and Kueker hit another two pointer. The Musketeers led 43-32 going into the fourth.

Unfortunately, in the fourth quarter the Musketeers offense went stagnant and the Pilots began hitting their shots. They would eventually tie the game at 46 with a minute remaining. With 50 seconds left, Birkner hit a left handed layup to go up 48-46. The Pilots responded with a two pointer of their own. The Musketeers help onto the ball for the final possession. After a Pilot’s foul, the Musketeers took the ball out of bounds on the side. Kueker inbounded the ball to Birkner who dribbled between the half court and three point lines, until he found Kueker on a backdoor cut. Kueker dribbled through the lane and shot a doubled teamed, reverse layup that bounced off the front of the rim and went in. Time had ran out and the Musketeers had won their first game of the year. The team swarmed Kueker after his insane game-winning shot. He finished the game with a career high 26 points. Birkner finished with 8 points and 10 assists. Wiegard finished with 8.

The win against Cairo was a much needed win for a team who was lacking confidence. They will use this confidence as they start their conference schedule with games against Steeleville and Dupo in the upcoming week.